← Treadmill Tell-all: AKA My Rant of the Month
My Dose of Wisdom for the Day →

The Long Run, Week 5: I Just Became THAT Girl

Posted by Jenni On The Run

You know the one. If you’re reading this, you likely are THAT person, too. And if you’re not, you probably will be before long.

I’m talking about those crazy runner people. The ones running in the dark, that the sane people drive past on their early morning commute. The ones who get up at an ungodly hour to squeeze in a run before their own workday commences.

I used to be the sane one (well, many that know me might not agree much with calling me sane, but never mind that), driving past the crazy runners in the dark. I’ve seen them in movies, dragging themselves out of bed, drinking smoothies, running on oddly quiet streets. I’d wonder over it all and think to myself that I could never manage to get up early enough for much running at all before my own earlier-than-most workday.

I’ve been squeezing in short runs on my strictly scheduled 30 minute lunch break, occasionally fitting one in during an odd lull in work, determined to not cut into my evening time with the family. Finally, my work and running schedules began simultaneously demanding more of me, and I had to bite the bullet. I set my alarm for 3am, got my lunchbox ready for the next day, and despite baby girl’s rough night, I crawled out of bed at that ungodly hour, hauled my butt to the gym and ran 13.14 miles in 2 hours 25 minutes (on the “dreadmill” no less, thanks to snow-covered icy roads). I became THAT runner.

And you know, what? I feel great about it! And the drudgery I normally feel while on the mill was shockingly non-existent today… I’m thinking that may be partially due to a product I’m currently testing. I’m really excited about it and look forward to posting my review (and possibly my first giveaway) once I wrap up testing in a couple of weeks.

But, back to the run. I felt like a well-oiled machine after about a mile and a half into it (usually the distance it takes for me to warm up). I chatted a bit with a few coworkers who visited the gym for a, comparatively, short workout. I managed to keep my competitiveness reigned in and not bump up the speed on the mill when said coworkers began logging miles beside me. I kept going through, ahem, poo pains (mile 10). I kept trucking along despite hunger cramps (mile 11 and onward). The only thing that made me break my pace was a “tweak” I felt behind my right knee. The pain itself was minor, but it concerned me since it didn’t feel like a “good” pain. You know what I mean, right? The difference between “good” pain and “bad” pain? Well, this felt like a “bad” pain, so I mixed in a lot of walking on that last mile. Good thing, too. After talking it over with hubby I realized that he had felt that same twinge a few years ago, pushed through it, injured it pretty badly, and still occasionally feels a bit of pain from it. Sooooo, it looks like I’ll be taking at least a few days off to give it a rest. Don’t want to take any chances, you know?

Did you run today? How did it go? Are you THAT runner? Any running injuries (old or new) to speak of? Any advice for overcoming minor injuries? 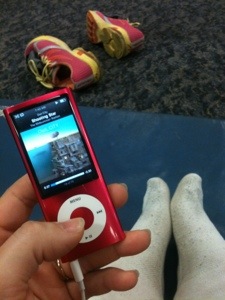 About Jenni On The Run

← Treadmill Tell-all: AKA My Rant of the Month
My Dose of Wisdom for the Day →